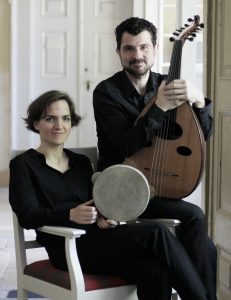 “Tradition is to feed the fire, not to preserve the ashes”

“Ahlam Babiliyya” (“Babylonian Dreams”) is a homage to the past high culture of the Babylonian Empire, which also laid important foundations for our European culture. This program combines the centuries-old tradition of Iraqi Maqa music and at the same time undertakes a gentle renewal and further development. Iraqi maqam melodies, compositions by classical masters as well as own pieces can be heard. Maqam is a musical style that is mainly rooted in the oriental world and the umbrella term for the tone scales used. The task of the maqam interpreter is to hit the affect of a maqam particularly well and to put the audience into this mood with empathy and virtuosity. The moment, the musical meditation, the art of improvisation are the focus of this concert. The rhythm of the drum carries the sighs, lamentations and wildly dancing joyful exultations of the oud like a stream of water flowing to infinity.

Saif Al-Khayyat and Nora Thiele met in Leipzig in 2002, which marked the beginning of an intense musical collaboration and friendship. The latest CD and programme of this Duo “Ahlam Babiliyya” (Babylonian Dreams), is an homage to the lost cultural heyday of the babylonian empire and features traditional Iraqi music as well as the duo’s own compositions and improvisation. The focus is on conservation of traditional Iraqi maqam music as well as the gentle renewal and further development of this style. This musical duo manage to bring together tradition and innovation in a breathtaking manner, impressing with their virtuosic collaboration and creating an intimate and mesmerising concert atmosphere with their artful playing. Like a stream flowing into boundlessness, the rhythm of the drum carries with it the oud’s sighs, laments and wildly gyrating cries of ecstasy. The moment itself is what stands at the heart of this project – a musical meditation, an ornamentation of affects.
In 2015 the Duo Al-Khayyat/Thiele won the Creole World Music Price Berlin. The Jury says:
The musical narrative exhibited great virtuosity and impressed us, as well as the delicate interplay between the musicians, who prove that you don’t need a large ensemble in order to open musical worlds.